"Lots of people have asked me who's interest am I serving by telling my stories? Do i have an ulterior motives? I think my motive right now is for me, and my healing. And honestly, I'm so tired of people who never spent any time alone with Chogynam Trungpa Rinpoche's (CTR) telling me I'm angry, or lying, or I have it out for certain abusers who still have positions in the hierarchy of Shambhala. Or I missed the point. Or what i experienced at his hands wasn't abuse. I am simply tired of being silenced and expected to continue holding on to these horrifying Mukpo Family secrets. So here's a nice feel good story about Chogynam Trungpa Rinpoche's (CTR): 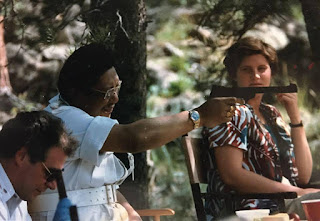 Chogynam Trungpa Rinpoche's is the man holding the gun

It was summer of 1985. I "married" CTR on June 12th of that year. I met him around May 31st at a wedding in the back yard of someone's home. That year, we had our "wedding" at Rocky Mountain Dharma Center (RMDC), now Sham Mountain Center (SMC) a few days before Assembly, then we had Seminary and Encampment happened during Seminary. That was the year he spoke of limited bloodshed and taking over the city of Halifax and the province of Nova Scotia by force.
We were in the middle of the Mahayana portion of seminary teachings.

For weeks, CTR had been asking everyone he saw if they had seen a cat. He asked the head cook, the shrine master, and all of his servants if they'd seen one. We returned to Prajna late one night after a talk and there was this beautiful tabby cat sitting on the porch. I said, "here kitty kitty" and he came right over to me, purring and rubbing against my legs. I picked him up and said: "Here sweetie, here's the cat you've been wanting." I can't remember exactly who was on duty but I think it was XXXX and of course XXXX. Someone took the cat from me and Rinpche ordered them to tie him to the table on the porch. He instructed them to make a tight noose out of a rope so the cat didn't get away. He stood over his guards to examine the knots and make sure they were secure. I was curious at this point, wondering what this enlightened master had in mind for the cat-I knew there were serious rodent problems on the land and I assumed he wanted to use the cat for this problem.

Then, he instructed the kasung to bring him some logs from the fire pit that was in front of the porch down a slight slope. We took our seats-CTR was seated to my right and there was a table between us for his drinks. He ordered a sake. The logs were on his right side, so he could use his good arm. Anyway, the cat was still tied by a noose to the table. Rinpoche picked up a log and hurled it at the cat, who jumped off the table and hung from the noose. He was making a terrible gurgling sound-and he finally got some footing on the edge of the deck and made it back onto the porch. Rinpoche hurled another log-making contact and the cat let out a horrible scream as the air was knocked out of him. I said: "Sweetie-stop! What are you doing? Why are you doing this?" He said something about hating cats because they played with their food and didn't cry at the Buddha's funeral. He continued to torture the poor animal and I was crying and begging him to stop. I said: "I gave you the cat, please...stop it!" And I'll never forget his response-he looked at me and said: "You are responsible to for this karma." and he giggled. I got up to try and stop him and he firmly told me to sit down. One of the guards stepped closer to me and stood in a threatening manner to keep me in my place.

The torture went on for what seemed like hours, until finally the poor cat made a run for his life with the patio table bouncing after him. It was clear he had a broken back leg. I'm sure that cat died. I looked for him or the table for the rest of Seminary and never found either. I imagined him fleeing up the mountain and the table catching on something and strangling him. I was completely traumatized by the event, but it was never spoken of again. Rinpoche told me the "karma" from this event was good. I was dumbfounded. A common feeling I had when around CTR was that there were things going on that I simply could not understand, while it seemed other people, with a knowing nod of their heads, understood things on a deeper level than I. I was in fear of exposing my ignorance, so I learned not to question and to go with the crowd around him. They didn't appear to have any problems with what he did-such was the depth of their devotion. I just needed to generate more devotion to Rinpoche and one day I might understand.

I kept this secret for 30 years. I filed it away with the other alarming things I learned from being so blessed as to be welcomed into this very small club of nearly enlightened students. I kept his bulimia a secret. Along with the drinking and womanizing and cocaine use-he made himself throw up until all that came up was blood.

The cognitive dissonance of witnessing his cruelty and suicidal tendencies that I witnessed was stomped on by the devoted students near him who refused to believe he was anything but the most enlightened teacher to ever walk the planet.

This is how one creates a cult and gathers students-they plant nuggets of profundity in our minds, and tell us to blindly trust samaya and devotion as the only way to enlightenment. They silence anyone with questions. They write devotional chants and stories, all about how meeting the guru saved their lives. They write of how he saw into their souls and loved them like no one ever had. The carrot at the end of the long stick is the promise of enlightenment, and thirty years later, as far as I can tell, this community is just as delusional as it was then, perhaps more so. If telling my stories keeps anyone from making the choice to sign up with this dysfunctional and, yes, dangerous community, that's a plus too."

If you have stories and first hand accounts and experiences in the Shambhala Community and would like to share, please do so here https://www.familiesagainstcultteachings.org/cult-help/contact.html

Stay tuned... a lot more to come and be exposed in the coming days and weeks about the Shambhala Community / Naropa University, past and present, from more brave survivors.

"Those Who Don't Confront Evil Are Empowering it". Tibor Stern
Posted by FACT.charity at 6:46 AM