Scientology & The Aftermath - A Personal Account from Janette Allen

We would like to give Janette the opportunity to share part of her story and views on our platform.

This is a personal account from a former Scientologist of 25 years, Janette Allen.

Hi. I first left Scientology back in 2011 when my then husband and I got wind of the St.Pete Times articles - The Truth Rundown. We were shocked to say the least of the stories of former sea org members and their accounts of abuse. We stayed under the radar for a year to try and come up with an exit strategy as we were entrenched in the Clearwater Scientology community - I had a thriving business and my then husband worked for a Scientology company, our kids went to Scientology private schools etc. We attended a bbq where Mike Rinder, Marty Rathbun and many other former sea org and Scientologists (out and under radar) were gathering, we wanted to hear the stories straight from the horses mouth. Needless to say, a picture was taken with the entire group at the BBQ and it made it's way back to the "church" and from that point on my then husband got fired from his job, I lost all my accounts, 90% of my clients were Scientologists, our lifelong "friends" disconnected from us -  overnight our entire lives were turned upside down and we were financially distraught. We supported this exodus of leaving Scientology and withdrawing our allegiance to this group that we thought was doing so much good for the world. 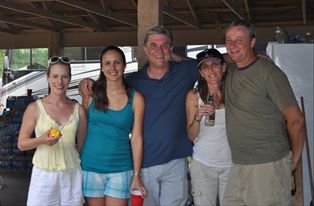 We donated money to the Marc and Claire Headley fund for their attorney fees for their lawsuit, we donated money to Debbie Cook and supported her through her trial. I made it a point to go and visit with Debbie Cook in San Antonio - having never met her before, I was appalled of her claims of abuse and again wanted to hear it from the "horses mouth" and she agreed to meet with me, where I urged her to come forward with all that she knew. Months later, I attended her court hearing and listened to her account of abuse for 2 days in San Antonio, TX. 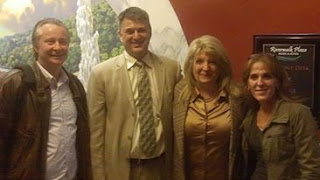 I have supported the ex Sea Org members through the majority of this exodus and expose of abuses since 2011 when I left, it was to the detriment of my own family and finances. I didn't have to, nor did anyone have to, many including myself, could have just stayed under the radar, not supporting the "church" but not speaking out either and all the while our lives would have been better off as a result, maintaining family, friends, finances etc.

It takes a while for a person to come full circle on what happened / happens in these cult communities. It has taken me many years to make sense of it all - all the while dealing with my own struggles financially, emotionally etc.

Within the last year I've witnessed some very shocking things occur. I've witnesses a young Scientologist (one of my child's best friends growing up, who used to live with us off and on) do a segment on the Aftermath show (I will not name names for confidentiality reasons), lose her family, friends and entire community as a result of doing the segment, only in the end it not make it to air for "legal reasons". Grown adults, who manage a non-profit and run a TV show - knowing the consequences this young girl will face for doing a segment on the show, still went ahead and wanted to film her story and let her face the "Aftermath" and consequences for doing so. If these grown adults, who have much more resources than this child has, had her back and her best interest at heart they would have responsibly advised her to stay under the radar, keep her family support system continue to focus on herself, get some counseling and just withdraw quietly from the community without being declared an sp etc. But instead, they wanted to run with her story, to sell more TV. They didn't need her story and in the end didn't run it anyways for "legal reasons" and her life is upside down and in shambles as a result.

She deactivated her social media accounts as the drama was overwhelming to her last summer. I supported her in that. She then told me that "Aaron Smith-Levin asked her to reactivate her facebook account and make her fundraiser for the Aftermath Foundation live again as it was gaining "traction and funds". She complied. I was in shock. This 24 year old young girl, who was going through a major crisis, just lost her family, was not stable in the least - and Aaron had the audacity to ask her to publicize her fundraiser. There is more but I will leave it at that!

Another shocker - I have personal lifelong friends who are stuck financially to a job with a Scientologist owned company. The husband used to be sea org at the International Base, the wife worked at a Scientology Mission for 10 years. The wife is under the radar because of her job, the husband not so much and may have been declared, and they are raising and homeschooling their child all the while on the road working endlessly. Financially they are stuck and ruined living paycheck to paycheck. I reached out to the Aftermath Foundation on their behalf to ask for 3 months of relief and help for them so they can quit their job with the Scientologist as it causes a lot of stress for them. The relief funds would have gone to pay 3 months worth of rent and living expenses so they could finally get off the road and get a stable apt and look for work outside of the Scientology community and pay expenses for 3 months while getting back on their feet (they traveled full time for work, were technically homeless - lost their home while in Clearwater as a result of debt from high pressured donations etc) living at hotels and in their car at times while traveling for this job. On top of all of this, the wife recently got diagnosed with cancer and needs to be in a stress free environment as her life depends on it. What was the Aftermath Foundations response to their "application" for help ?

Dear XXXXX, Thank you for submitting an application for aid.

The purpose and mission of The Aftermath Foundation is a narrow one: “To help those who have recently left Scientology or the Sea Org, or those who want to leave, but lack a system of support to rely on while getting on their feet in the outside world.” Upon a close examination of all the data you provided to us, the board finds that you unfortunately do not qualify for aid from The Aftermath Foundation. Your current situation, as painful and heartbreaking as it is, is not related to having recently left or needing help to “get on your feet.” You left the Sea Org in 1998. You were declared 6 years ago. Our suggestion is that you apply for aid to one of the numerous foundations that assists cancer patients. Therefore your application for financial aid cannot be approved. The board however is eager and able to help you in creating a current resume and maybe even in finding a new job through our volunteer network. You can write a specific request for this help if you desire it, and it will be forwarded to all pertinent volunteers.

Sincerely, The Board of Directors The Aftermath Foundation"

According to The Aftermath Foundation website their Mission Statement is as follows:


"The Aftermath Foundation exists to help those who want to leave Scientology and the Sea Organization, but lack a system of support they can rely on while getting on their feet in the outside world.

Former Sea Org members tend to be industrious workers but many have no employment history nor family outside of Scientology. Further, many have no formal education, bank account, driver’s license or credit history.

The challenges one encounters when leaving Scientology and the Sea Org are many. The Aftermath Foundation is devoted to providing resources, support, and advocacy to those who leave so they can gain their independence and make their way in the world. The Aftermath Foundation is also dedicated to raising public awareness of the abusive practices of the Church of Scientology."

Nowhere on their website does it state "Recently want to leave Scientology or the Sea Org".

Their Aftermath promotional cards state the following - the picture is straight from their social media page: 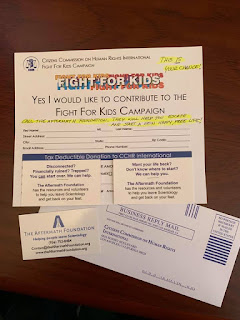 I'd like to say this - I'm extremely disappointed in the Aftermath Foundation and all the people who are on the Board of Directors. There are a lot of people who are / were in desperate situations that you have denied help to - people who supported all of you ex sea org only years later to be silenced, censored, blocked, used and their stories, questions, voices and circumstances disregarded on your "Fans of Leah Remini Scientology & The Aftermath facebook group, on other platforms and in general.

To act by your actions as if you all are the "elite" bringing Scientology abuses to the forefront and most everyone else treated as if they are nobody yet once again (like people were treated by many of the sea org while In Scientolgy). You're lack of compassion, empathy and "status happy ego's Shine through. Specifically to Rinder, Rathbun, Cook and the rest of the ex-sea org members & others - Profiting off of book deals, TV shows, backdoor legal settlements, bobbleheads, youtube channels, "fame/status", blogs etc etc - while there is still abuse occurring on both sides of this war - I'm ashamed I ever supported any of you - you are not the kind of people I once thought you were.

If any of YOU - Rinder, Rathbun, Cook, Miscaviage Sr. etc have information that can help in unsolved criminal cases - YOU HAVE A MORAL OBLIGATION TO DO SO - even if that means incriminating yourselves and doing a little bit of time. Someone Take one for the team and shut this war down!

I'm happy to be FREE from this toxic, social mofia like war that the lot of you former top executives Created. I hope you can sleep as good as I do at night - I know my conscious is Clean!

Disclaimer: The above statement is not the view of F.A.C.T. Inc, we are merely providing a platform for former cult members to speak their truth and stories, free of censorship.

Thank you,
The FACT Team
Posted by FACT.charity at 4:49 PM