We've been receiving a higher than usual number of complaints and emails for support regarding
gang related stalking, trafficking, intimidation and manipulation. Several individuals and families are reaching out for help.

Here are just a couple of recent reports we've received:

"Real social dynamics in Los Angeles is trafficking women and gang stalking them while covertly using their social media and stolen cell phone data to covertly sexually groom, manipulate, and condition women and also lure them out of their homes. They are an underground mafia based on fight club who has chapters of people doing illegal things internationally like millions of men who are sexist and far right connected to white supremacy and the proud boys/oath keeps. I worked for them for a while online from my home in XXXX and when they didn’t pay me after a year and a half I stopped working for them. Well they’ve started gang stalking me and threatening me while trying to lure me out of my home to possibly rape me. I’m not sure but I am informing every authority in California of this gang activity and abuse movement towards women. I didn’t know about he abuse I was working with them to try to counteract their bad behavior and cause I seriously need to make money to support my disabled child... they were getting. Kicked out of countries for bad and sexist behavior and I was tying to help as I thought it could be a win win but it turns out they really are criminals and rape rings and traffickers! Already filed another report with LAPD, The FBI, Human Trafficking, and the Bel Air PD. They are also affiliated with the oath keepers which is an anti government organization."

"Hello. I'm a full time father I have 4 kids an a finance. For the past 6 years we have been monitored by a cult. We live in Anaheim Ca. I've figured it out an I am very certain that it is a cult who manipulates Christian faith an black magic. They have been trying to break us apart for years. I believe they are going after my kids. We've been poisoned. Threatened. They lured us to home an different living situations. They have all of our personal information. Now we are stuck in a hotel. Where the maids an mangers are part of it. They sneak in our room when we leave to cast spells an poison are food an drinks. The do death stress letting us know when they are around. Honk there horns abruptly. They knock an pound on our walls. Constantly trying to out us in dress to break us down an our immune system. Then poison us. I feel they are after my kids. Some are people of higher power. Policeman an landlords. I'm looking for help. We need out an far away from this location. It's gotten to the point my oldest daughter notices." 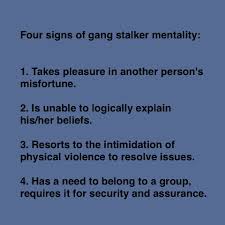 The National Criminal Justice Reference Service wrote an abstract about this titled, Comparison of Cults and Gangs: Dimensions of Coercive Power and Malevolent Authority.

Here's a portion of that abstract and the link to the full report:


"Groups regarded as "cults" have much in common with groups regarded as "gangs" in modern American society. They are similar in that both groups restrict members' exercise of freedom in thought and belief; both demand unquestioning obedience from their members; both have self-appointed authoritarian leaders; and once persons join both types of groups, they tend to undergo certain predictable personality changes. Cults, like gangs, fall in the realm of deviance, and both types of groups encourage members to become situationally dependent on the "group identity." Both gangs and cults recruit members based on the human need to be accepted and be a part of a group that will affirm personal significance. The primary difference between cults and gangs is that cults have as their axial principle of organization some spiritual/religious/ideological belief system; gangs, on the other hand, are commonly perceived to have no such well-developed belief system. Further, gangs are more sinister in terms of the use of violence against their own members and those outside the gang. Disobedience in a cult occasions much less severe discipline, and violence against non-cult members is not common behavior for cult members."


The FACT Team
Posted by FACT.charity at 7:41 AM