The training comes under the guise of gratitude. When attending indoctrination begins almost immediately. There are activities which encourage increased blind trust and social pressure to illuminate any previous on trusting attitudes or behaviors you may express. You are forced to give your word to a number of agreements and the first day of training in a social setting by standing for agreement and sitting for non-agreement. No one would disagree due to social pressure, even though we knew that many of the agreements were impossible to keep.

Once the stage was set that we would keep our word and would increase our level of trust for unknown individuals, the next three days this group worked on our brains. They used damn lighting and staring into another’s eyes to cause altered consciousness. They brought on extremely Traumatic memories and even encouraged members to act out behaviors done to them by abusive parents. In my research since leaving I’ve seen the methods used referred to as trauma bonding and love bombing. We gave our word that we would not share the nature of the activities we were involved in so we didn’t ruin the training for future participants. This was actually an effort to keep us from sharing the nature of our experience with those closest to us. Outside society was called the drift, we were to oppose the drift.

We participated in an activity where we were told the most attractive and least attractive things about ourselves by other members of the training. Once we got a firm grasp on what was wrong with us we were informed that we could have a breakthrough and fix these things and part two of training, which turns out to be $1200. This part of training was just discovery. And of course there is a part three, which also requires payment and recruiting of new trainees and a large devotion of unpaid time. We were basically psychologically manipulated to convince us that something was wrong with us and we needed gratitude training to fix it, that this was the only way we would have an extraordinary life, and that we would need to depend on them to be our community and provide that extraordinary life. It was incredibly disturbing and I’m still having physical and psychological stress responses more than a week after participation.

I was recruited by a friend who was recruited by friend. They use a referral network to get people into the training. That way they have somebody who can speak to you when you tried to leave and encourage you to go back in. They also connect you with the coach while you are in there who begins a series of calls while you are in the training and after you leave the training to keep you connected to the group and in the mind frame that they want you to be in. The individual who referred me is very involved in the group, and I have learned since leaving that connections with family and previous friends have been severed in favor of this group.

Yes! I had to go see my therapist who believes that quite a bit of work towards emotional recovery from trauma has been undone in this short span of four days. I can’t eat, I haven’t been able to in a week. My stomach is in knots. I’m fearful, suspicious, I can’t access certain parts of my brain. I feel like I have been a participant in a scary psychological study from World War II Nazi Germany. That’s the best way I can describe it. It was incredibly disturbing and I feel incredibly disturbed. I am even nervous posting this in your contact form because I don’t want the information to get back to the individuals who hold this training before being able to report them in someway and limit their damage in my community moving forward. While part of me as aware that this level of suspicion is larger than the situation merits, it is there nonetheless.

Is there anything else that we should know or you would like to tell us:

They require an extensive series of signatures releasing them from damage before going into the training. The email they send before you go has highlighted in bold the words “based on what you tell us” and then follows that you may need a doctors note to participate. Due to the fact that it was the day before the training and I didn’t have time to go to the doctor, I took their bolded and highlighted cue and did not tell them that I had any condition requiring a doctors note. I do though, I’ve previously suffered from anxiety and depression, which have been successfully treated, and believe they would merely use this information to discredit my complaints against them."

From a recent article on Truthdig.com : https://www.truthdig.com/articles/an-alienated-culture-grooms-women-for-cults/

"Rachel Bernstein, a marriage and family therapist in Encino, Calif., warns that group awareness trainings can be damaging and even dangerous. 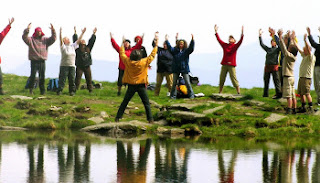 “They often have you sign a thick stack of documents,” she says. “You basically sign away your rights to sue if something goes very wrong. They will present them to you and give you no time to read them. While possibly not as dangerous as some other cultlike circumstances, some attendees have ended up in psych wards.”

Some groups pick names that imply association with a legitimate business or a university. The first session will usually not be expensive, but participants will be aggressively invited to sign up for the “advantages” they can get at the next level. The crowd is often peppered with people who work for the cult and claim the training is the best thing that has ever happened to them. When they break the crowd up into small groups, they expose participants to “manufactured closeness.” Participants may be pushed to publicly share their deepest fears or most traumatic experiences with people who are not mental health professionals. Bernstein says these confessions help establish a commonality of experience and identity, and are used as hooks."

The FACT Team
Posted by FACT.charity at 5:12 AM