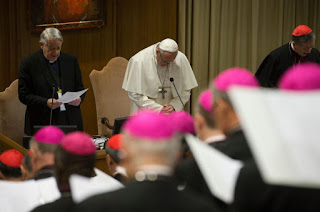 "Files that could have documented the terrible deeds and named those responsible were destroyed, or not even created," said Marx, beginning a list of a number of practices that survivors have documented for years but church officials have long kept under secret.

"Instead of the perpetrators, the victims were regulated and silence imposed on them," the cardinal continued. "The stipulated procedures and processes for the prosecution of offences were deliberately not complied with, but instead cancelled or overridden."